Binnington rebounds, Blues rally to beat Lightning 4-3 in SO

Binnington rebounds, Blues rally to beat Lightning 4-3 in SO • Lightning win shootout 2-1 • Binnicker second in 3-on-3 with hand on frame of puck C.J. Smith and the St. Louis Blues’ Austin… 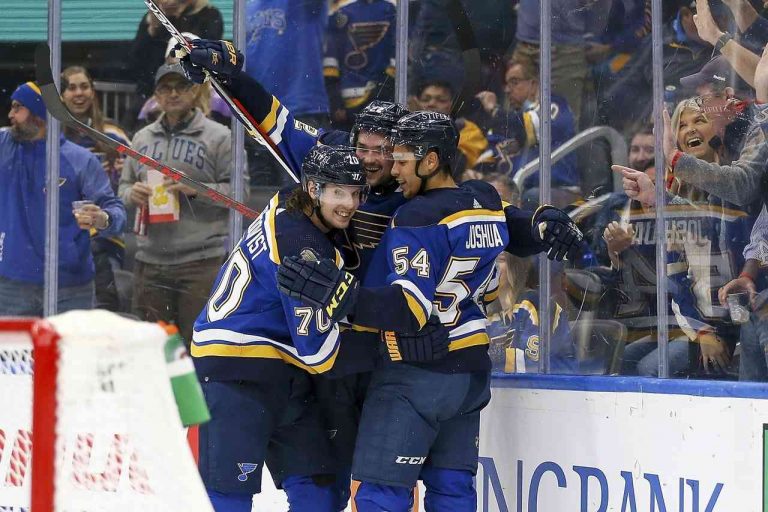 • Binnicker second in 3-on-3 with hand on frame of puck C.J. Smith and the St. Louis Blues’ Austin Watson (32) and C.J. Smith of the Nashville Predators fight for control of the puck. Photograph: AP

Tampa Bay won the shootout 2-1 with Brayden Point and Steven Stamkos scoring in the final round. Ivan Barbashev, Vladislav Namestnikov and Tyler Johnson scored for the Lightning, who have won four straight. Tyler Johnson has a point in 13 straight games.

Binnington slipped away from the net to change sticks midway through the second, but left in the third when he was helped to the dressing room because of an injury.

“We battled through adversity,” Binnington said. “It was a tough first period but we got pucks deep and played our game. Got that second goal, gave us life, allowed us to go on a little run and got the win. It’s all about those little things.”

The Lightning faced the prospect of being the second NHL team to lose six consecutive games after claiming their franchise-record 24th straight victory on Oct. 20 against Montreal.

Brad Hunt had a goal and assist for the Blues, who have won seven of their past eight against Tampa Bay.

“We battled hard,” said winger Brayden Schenn, who also scored a goal. “Jordan stepped up to the plate. He was in a tough spot. Thought he was going to be called on to play the whole game, but he knew he could come in and play well.”

Barbashev opened the scoring with a power-play goal at 4:18 of the first, a nice tic-tac-toe play.

“I was going down deep and saw Barbashev loose out in front, so took a step back and saw he had the puck,” St. Louis forward Vladimir Tarasenko said. “Then it was just a matter of finding him.”

Joni Hillek got a fast start to his NHL career after helping the St. Louis Blues win their first-ever Stanley Cup in 1953. Hillek led the way on a 17-year run of stability before finally making the journey into the NHL. Hillek, who died on Friday at age 78 after losing two of his three children in a house fire two days earlier, played 265 games for the Blues and moved on to the Detroit Red Wings.