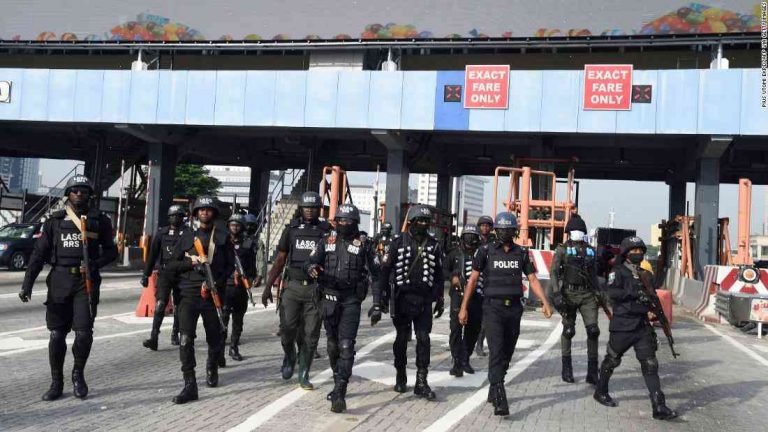 A deadly shoot-out at a toll gate between people on both sides of a standoff at an upscale mall was apparently an attempt to ram a crowd of street vendors by a gunman, according to Nigerian authorities.

The Nigerian government denied any link to the incident, saying that it was based on “fake news”.

The raid began in the early hours of Friday at the gates of the Lekki Phase One shopping mall in Lagos after customers had checked out.

Ramesh Tainwala, a 39-year-old assistant coach for the Nigerian national Under-20 football team, told Reuters he had been in a car with other people in the parking lot at about 1am when a gunman opened fire on the premises.

“We saw a group of people in those gates. There was an exchange of fire, and then he was chased by these people,” Tainwala said.

Tainwala said there were several gunshots. A BBC Nigeria reporter who was watching the scene after it had been captured on video and pictures said he heard gunfire and saw up to 10 people being hit by the bullets.

The Nigerian state police commissioner, Abba Kyari, said the motive of the shooting could not be established but that “it was not terrorism”. He told journalists: “There is a possibility that the people in those gates were trying to ram through the crowd of vendors that were closing in on them”.

The attacker died in the altercation. Two people in a nearby hospital confirmed the injured also included a soldier and a police officer, Reuters reported.

The Lekki complex is one of the city’s best-known shopping areas, with the Lagos state government said in 2015 it had welcomed 4,700 new stores and 32,000 homes since it opened. At least three people were killed at a barbershop and a motorcycle repair shop in the late 1990s.

Late on Friday, the Malaysian government said the shooting had “no link to any action or policy relating to Malaysia”. A statement on Malaysia’s website said: “At the request of the Nigerian government, Malaysia has offered assistance in this case.”

Pakistani police chief Qamar Javed Bajwa said the incident sounded like security response. “This is a very clear case of security response. If we have people coming from the street who open fire and are chased by people, what do we do,” he told a media briefing in Karachi.

Residents of Lagos baulked at the idea that a fight among street vendors could have sparked the standoff. The state government’s housing ministry said in a statement: “There was a clash in a parking lot outside Lekki Phase one Mall involving various vendors and that was reported to the police.

“A shootout ensued between the security personnel, who were trying to quell the altercation and vendors; in which one person died. The incident has not developed into any form of terrorism or incident that has disrupted law and order in the state.”